BORIS YELTSIN WOULD HAVE BEEN EIGHTY-THREE TODAY 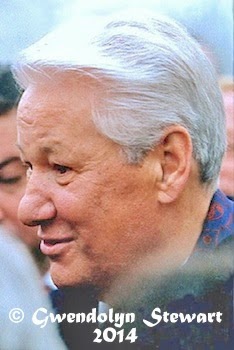 Posted by PICTURE POLITICS at 3:06 PM No comments:

THE END. OF THE PARTY. TWENTY-TWO YEARS AGO. AND THE ROLE OF BORIS YELTSIN.

THE SUPREME SOVIET
OF THE USSR
SUSPENDS ALL ACTIVITIES OF
THE COMMUNIST PARTY OF
THE SOVIET UNION (CPSU)
August 29, 1991 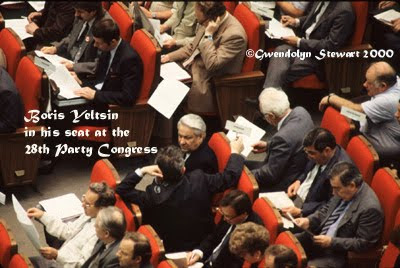 BORIS YELTSIN IN HIS SEAT AT
THE 28th (AND LAST) CONGRESS OF
THE COMMUNIST PARTY OF THE SOVIET UNION
(CPSU), MOSCOW, JULY 1990

YELTSIN WALKING OUT OF THE PARTY, here

Twenty-two years ago today, the USSR Supreme Soviet, then the highest government authority in the then Soviet Union, voted to suspend the activities of the previously ruling Communist Party of the Soviet Union "pending an investigation of its role" in the August coup.

As the New York Times report on the subject noted, "The fate of the party was already sealed before Parliament's vote. Individual republics had closed its offices and seized its vast properties and funds and President Mikhail S. Gorbachev had quit as its General Secretary and had called on the leadership to step down."

"Individual republics" -- yes, but, the individual republic that mattered was that of the RSFSR, or Russian Soviet Federated Socialist Republic, whose duly elected president was Boris Yeltsin.

On July 20, 1991, Yeltsin had signed a "departization" decree "aimed against Party activity (officially, all parties' activities) in government organizations and state enterprises on Russian soil" (to quote myself in SIC TRANSIT, Chapter 8, "Endgame").

On July 30, 1991, after his meeting with American president George Bush in the Kremlin, Boris Yeltsin was happy to interpret his actions and intentions to those of us waiting to listen. [See here and here.]

To continue quoting "Endgame," "Gorbachev, facing another hostile Central Committee meeting shortly, should thank him [Yeltsin] for opening a second front and providing a diversionary action, he gloated. The decree, due to come into effect on August 4th, had stirred up a storm of protest and condemnation from CPSU and Russian Communist Party bodies.  Its timing may have been chosen, as Yeltsin alleged, to draw conservative ire away from Gorbachev at a crucial juncture, but its main thrust continued the battle to break the Party's power from within. ... However weakened the Party might have been already, through Gorbachev's initiatives and subsequent internal hemorrhaging, it still had a grip on the Soviet polity and economy that enabled it to stifle real reform.  Yeltsin's decree was intended to cut off its tentacles in the government offices and workplaces of the Russian Republic, his domain, more than a month before Gorbachev was finally moved to take action against its head -- after the coup."

Posted by PICTURE POLITICS at 1:38 PM No comments:

THE LAST DAY OF THE AUGUST 1991 SOVIET COUP 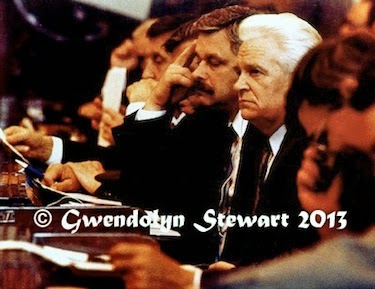 On Wednesday, August 21, 1991, a delegation of Russian leaders including Vice-President Aleksandr Rutskoi and Prime Minister
Ivan Silayev flew to Foros in the Crimea, where Soviet President
Mikhail Gorbachev was said to have been held against his will
since Sunday, August 18th. A delegation of Soviet leaders flew in
a separate plane. Gorbachev rejected them as implicated in the
coup against him, and flew back to Moscow with the Russian
delegation instead. His arrival in the early hours of August 22nd
definitively ended the coup, but Gorbachev was soon to find he
had stepped back into a very different political world.

More to come in  RUSSIA REDUX

WHY THE AUGUST COUP? THE UNION TREATY WAS SUPPOSED TO HAVE BEEN SIGNED TWENTY-TWO YEARS AGO TODAY 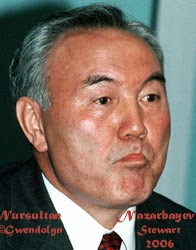 NURSULTAN NAZARBAYEV
President of Kazakhstan
Photographed in 1997
In office in 1991, and still in office today

Gorbachev has described the coup plotters "as 'egotistical careerists' who decided to act against him when it became clear that there would be no place for them in the new order."  The new order was to be brought into being by the signing of the Union Treaty on August 20, 1991; it "would have reshaped the Soviet Union as a loose confederation of sovereign states and resulted in a major government shake-up."  So it was not just some abstract concerns about intergovernmental structures which drove the conspirators, according to their patron, but the detailed knowledge about kto kogo -- who was going to do what to whom.

For Gorbachev was convinced, afterwards, that his conversations with the top republican leaders at Novo-Ogarëvo were bugged, and what they contained was dynamite.  Gorbachev has been releasing this dynamite in pieces.  In an early version he revealed that:

Yeltsin, Nazarbayev, and I already had an understanding that once the Union Treaty had been signed, and without waiting for the new constitution, we would move toward new organs of power and new elections.  We were thinking in terms of agreeing this [sic] with other republic leaders too.  Thus, new people would have come to the fore.

Boris Yeltsin of Russia, Nursultan Nazarbayev of Kazakhstan, and Mikhail Gorbachev of the Soviet Union, had reached an understanding.

And so some of the "old people," people Gorbachev had appointed,  organized the coup -- the GKChPists, including Vladimir Kryuchkov (the KGB) and Dmitry Yazov (Ministry of Defense) and Boris Pugo (Ministry of the Interior).

But they did not seize Boris Yeltsin.

Thousands had come to defend the Russian "White House," Yeltsin's base. 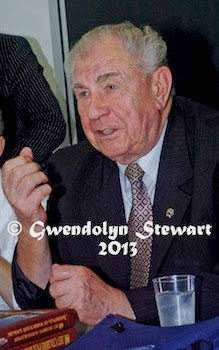 Photographed in 2005, after his membership in the failed GKChP coup attempt led to eighteen months in prison, and after the Presidential (Putin) award of the Order of Merit, November 2004

Posted by PICTURE POLITICS at 2:21 PM No comments: 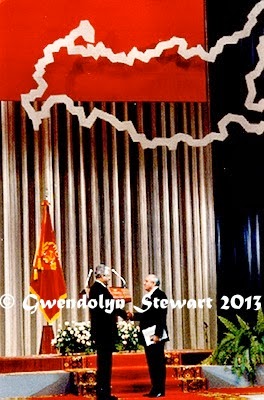 Some background to the coup that helped precipitate the breakup of the Soviet Union:

As of June 12, 1991, Russia had a popularly elected president, for the first time in its history.  As the Russian Soviet Federated Socialist Republic, though, Russia was one part of the Union of Soviet Socialist Republics, which had its own president, Mikhail Gorbachev, who, however, had not sought, and did not have, a popular mandate.  Gorbachev did attend, and speak at, Yeltsin's inauguration on July 10 (above).

After the election, Yeltsin set about building up his Moscow as a power base and Russia as a sovereign entity, claiming resources the "Center" had hitherto controlled.  In August he made a tour of Tyumen', a major oil and gas province of Russia.  The day the coup began, Sunday, August 18, he was back in the Moscow region.  Gorbachev was vacationing in Foros.  It was there that the State Committee for the State of Emergency, or coup plotters, did or did not arrest the head of the Soviet state and the Communist Party of the Soviet Union.  In any event, they announced that Mikhail Sergeyevich (Gorbachev) was ill.

Posted by PICTURE POLITICS at 5:26 PM No comments: 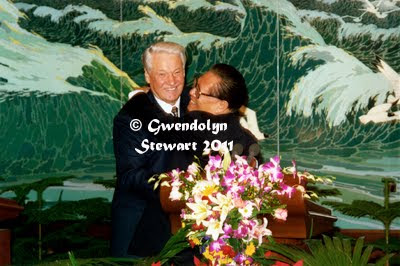 Posted by PICTURE POLITICS at 1:01 PM No comments:

WHAT ELECTIONS
CAN BRING 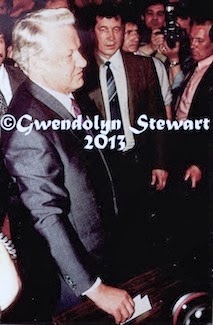 
Today Boris Yeltsin is the news as a comparison point in a Forbes piece by Melik Kaylan on "Understanding Egypt":


"The last decade has introduced to the world the novel phenomenon of the genuinely re-elected dictator, the populist who gets successive mandates largely because he controls all information, much of the economy, starves opponents of funds, because he has delivered a measure of stability and because the alternative looks worse. The alternative might be what went before – Boris Yeltsin in Moscow...."

Posted by PICTURE POLITICS at 5:54 PM No comments:

BORIS YELTSIN
CHECKS IT OUT 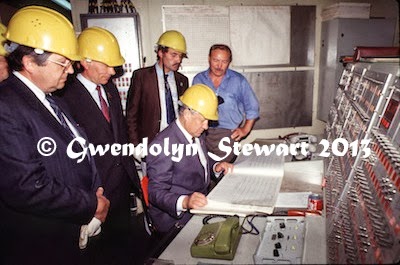 
From today's Washington Post obituary of Kongar-ol Ondar, a "master of throat singing" from the Russian republic of Tuva:

He mesmerized audiences with his ability to produce two or more notes simultaneously — a low, steady drone overlaid with higher-pitched tones that to the unaccustomed ear sounded like a radio gone haywire.
His talent was so extraordinary that when he sang for Yeltsin in 1994, the Russian leader looked into his mouth in search of a device that could produce such music.

From Russia Redux, Chapter Six:  Yeltsin "was never kabinetnyi, never one to be desk-bound."  He "liked to be out in the field, seeing things first hand."

Posted by PICTURE POLITICS at 9:29 PM No comments:

SEVENTY YEARS SINCE THE BATTLE OF KURSK 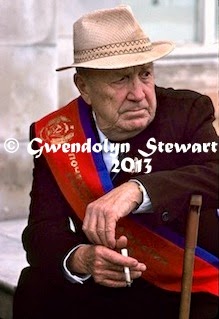 A VETERAN OF THE BATTLE
OF THE KURSK SALIENT
at the 50th Anniversary
ORËL, RUSSIA
August 1993

Posted by PICTURE POLITICS at 8:02 PM No comments:

ALL PHOTOGRAPHS & TEXT BY GWENDOLYN STEWART; COPYRIGHTED 2013; ALL RIGHTS RESERVED.